Judeo Christ Jewelry: The Coming Together of Two Religions

In the time of the 20th century, Judeo-Christian culture was one of the biggest political inventions. Though it was considered as one of the unstable foundations, it was a historical turning point in America's political history. For Jews, Catholics, and Black Americans this foundation was a path to the infusion into postwar American democracy. National Unity and racial healing were the main aspects of this prestigious “Judeo-Christian” culture.

When we discuss any particular culture, things that we observe are clothes, jewelry, food habits, way of living, etc. So here also the designing of jewelry had always played an important role in depicting the culture. Both the religious beliefs are completely different. Compiling both the cultures together and showing it in just a piece of jewelry is not everyone’s cup of tea. But nothing seems impossible with Jewelry America.

In Judeo-Christian Jewelry the two symbols that are generally used are “Star of David” and “The Holy Cross.”

The Star of David represents both Judaism and Israel. The Star of David consists of two overlaid triangles, which form a hexagram shaped six-pointed star. This Star is seen on the flag of Israel and Jewish tombstones. In the Hebrew culture, it is known as Magen David or the Shield of King David. According to historians during the 17th century, the Jewish quarter in Vienna was marked with a hexagram to differentiate it from the rest of the city, and at that time this symbol was widely used in the Middle East, Europe, and North America.

Another important and valuable symbol, used in Judeo-Christian Jewelry is the Holy cross. In the 2nd century, using the cross in jewelry was considered as an inappropriate gesture because it was related to the cruel crucifixion of Lord Jesus. But in the 3rd century and 4th century, people expressed this as a sacred symbol of both passion and protection. To this day, people do believe in wearing these cross pendants, because this sign brings positivity and hope for a fresh start.

If you are looking for religious jewelry to match with your regular outfit then this Rose Gold Jewish Star of David pendant with a religious cross is a perfect solution to quench your thirst. The design features the holy cross surrounded by the Jewish Star of David. This pendant has a stunning, shiny finish and is generally used as a sign of protection and dedication to God. In Jewelry America all our pieces of jewelry are handcrafted in the USA. 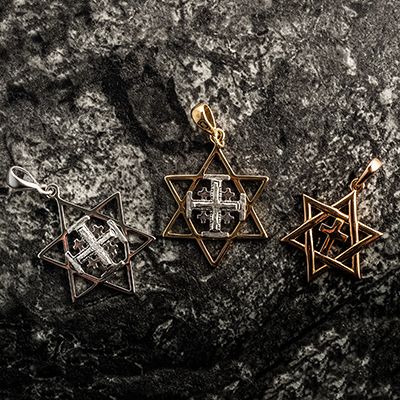 Judeo Christian jewelry for him

The design of this pendant resembles the previous one. But the contrast of color and texture distinguish this particular pendant. If you are looking for a genuine 14k gold piece, then nothing could be better for you than this. The pendant has the cross enclosed in two overlaid triangles. One side of the triangle has a shimmery and uneven texture, which is elevating the beauty of this simple design. 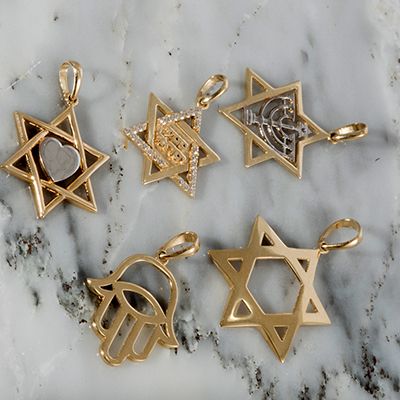 If you want to be a little experimental regarding your look and also want to take a short detour from the orthodox styles you can use this handcrafted Gold Jesus pendant. Due to the light weight it could go with any kind of traditional, casual, or formal outfit. This handmade savior pendant features the face of Lord Jesus with diamond cut style design and Satin finish. Therefore the combination of even and uneven texture makes it look unique from other designs. Since the internet and the digital market came into existence, it created a bigger market for these kinds of jeweler’s. Thankfully, now the idea and choice of jewelry are changing eventually. People are no more in a box full of preconceived notions. In this growing market, people are now seeking various options, especially in fusion. At Jewelry America we have various designs in religious jewelry..